4 November 2021, Baku: The Central Bank presented commemorative currency issued to circulation on the occasion of the anniversary of the historic Victory of the Azerbaijani Army in the 44-day Patriotic War of 2020 under the leadership of the Supreme Commander-in-Chief of the Armed Forces of the Republic of Azerbaijan Ilham Aliyev.

Opening the event, Elman Rustamov, Governor of the Central Bank noted that the 44-day Patriotic War by the Azerbaijani Army under leadership of Victorious Supreme Commander-in-Chief ended in victory. Our victory in the Patriotic War of 2020 for the liberation of Karabakh, historical lands of Azerbaijan from Armenian occupation went down to history as the brightest page. The unshakable will of the Azerbaijani people, great courage of our national army and the iron fist ensured liberation of the homeland occupied and plundered by the Armenian fascists for almost thirty years. This victory, founded by Heydar Aliyev, the National Leader, is based on the great state and army building successfully pursued by President Ilham Aliyev, his wise foreign and domestic policy, tireless work of our great people and the heroism of the Azerbaijani soldier.

The successful political course pursued in the country, the high international position and prestige of our state, the strengthening of its economic and financial potential and, most importantly, the President-People Union played a decisive role in this victory.

It was noted with great pride that 12 employees of the Central Bank also took part in the Patriotic War. They were awarded with medals by the relevant Orders of the President of the Republic of Azerbaijan, as well as honorary diplomas for high results.

Then E.Rustamov said that to perpetuate the history of this Victory, which will not be erased from the memory as one of the most glorious pages of our modern history, the Central Bank is announcing that it issues to circulation 500 manat denominated ‘ZƏFƏR’ (VICTORY) commemorative banknote, silver and gold ‘Zəfər’ commemorative coin , as well as silver commemorative coins dedicated to the town of ‘Shusha’, the regions of ‘Jabrayil’, ‘Gubadly’, ‘Agdam’, ‘Zangilan’, ‘Fuzuli’, ‘Lachin’, ‘Kalbajar’, ‘Khojavand’ and the settlement of ‘Sugovushan’.

The main design elements on the commemorative banknote are the words of the President of the Republic of Azerbaijan ‘Karabakh is Azerbaijan!’, images of the mausoleum of Mullah Panah Vagif, an example of the historical and cultural heritage of our country, the Khudafar's bridge, an example of ancient architecture, the Askeran fortress, as well as the words ‘November 8 Victory Day’, Kharibulbul, the symbol of our victory, red tulips embodying the blood of martyrs and veterans, invincible Azerbaijani soldiers and our tricolor flag.

The Central Bank also renewed the 20 manat banknote dedicated to the ‘Karabakh’ motif within the existing concept that will be issued to circulation next year. The main design motifs on this banknote are – swords, helmets and shields depicting the strength, power and commitment of the Azerbaijani people, as well as the Kharibulbul sign, considered a pearl of Karabakh flora that symbolizes victory and the word ‘Karabakh’. 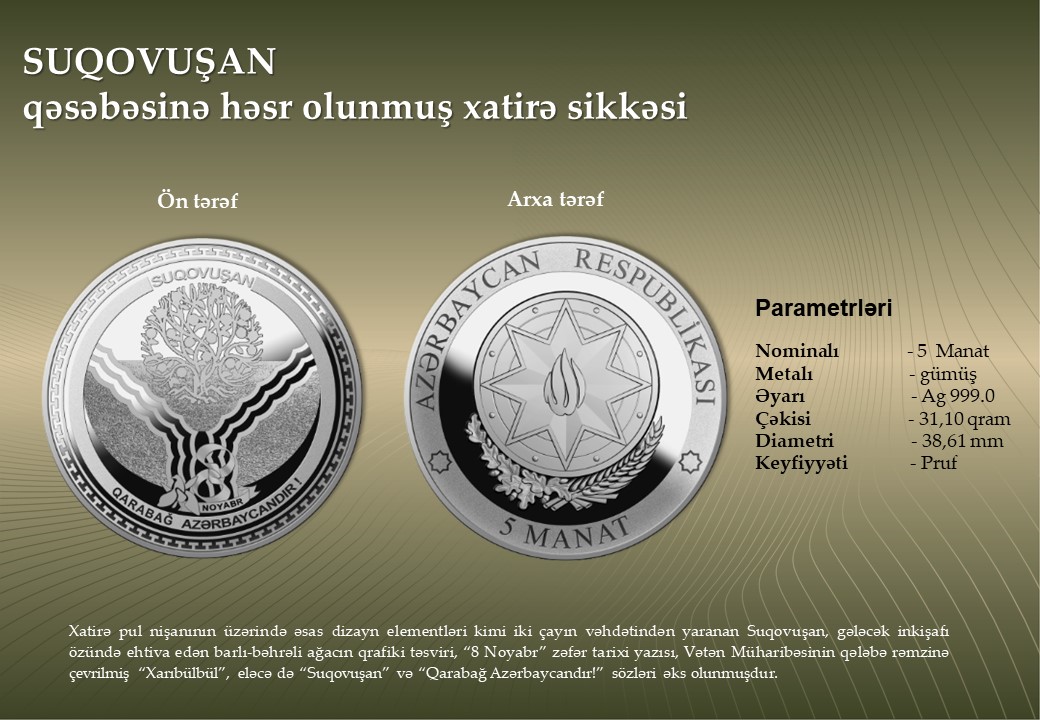 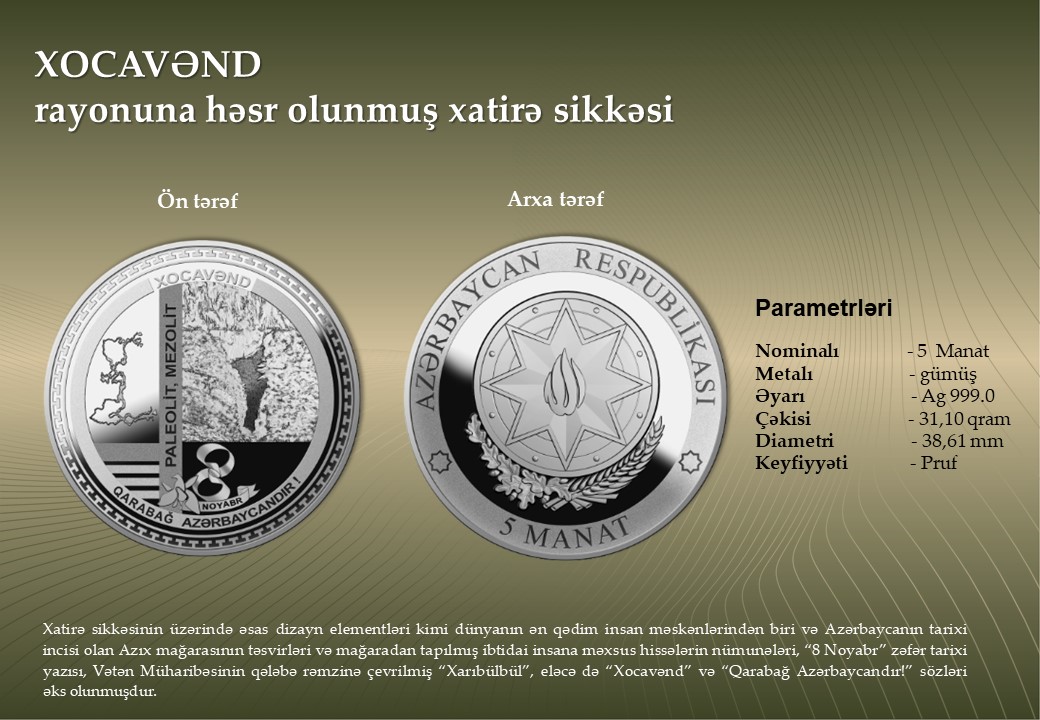 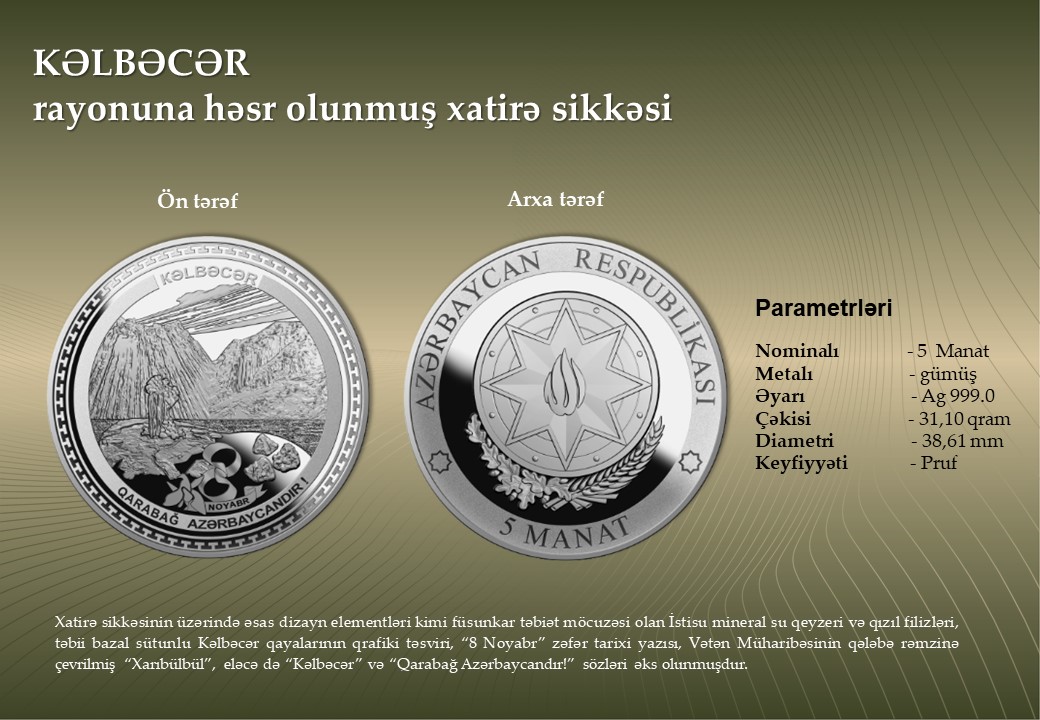 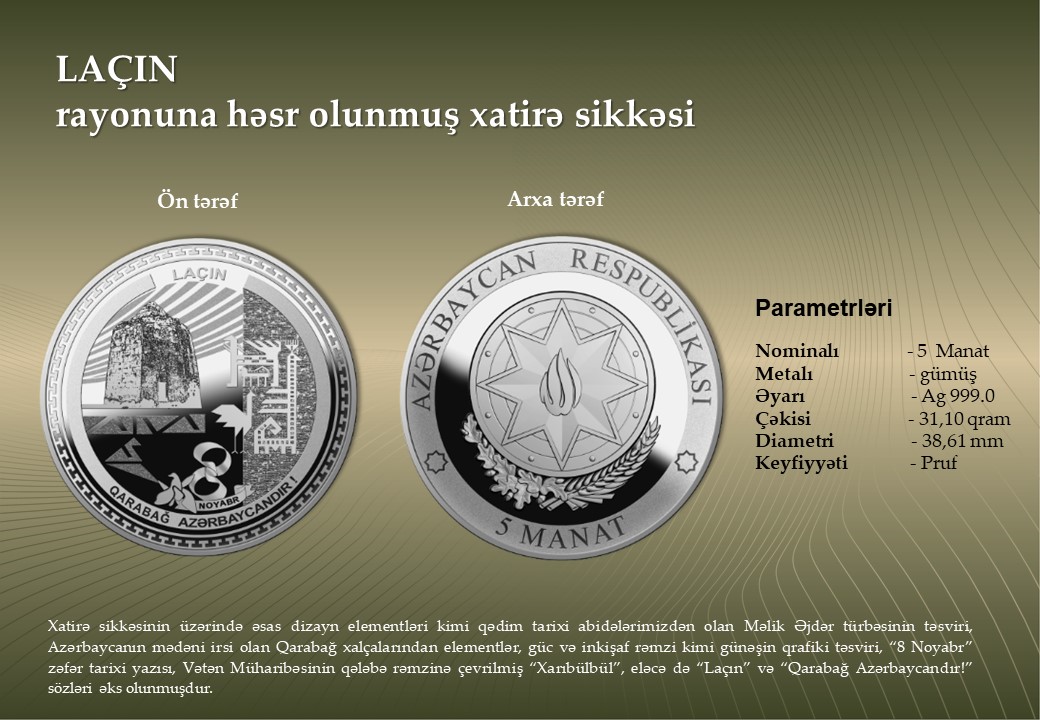 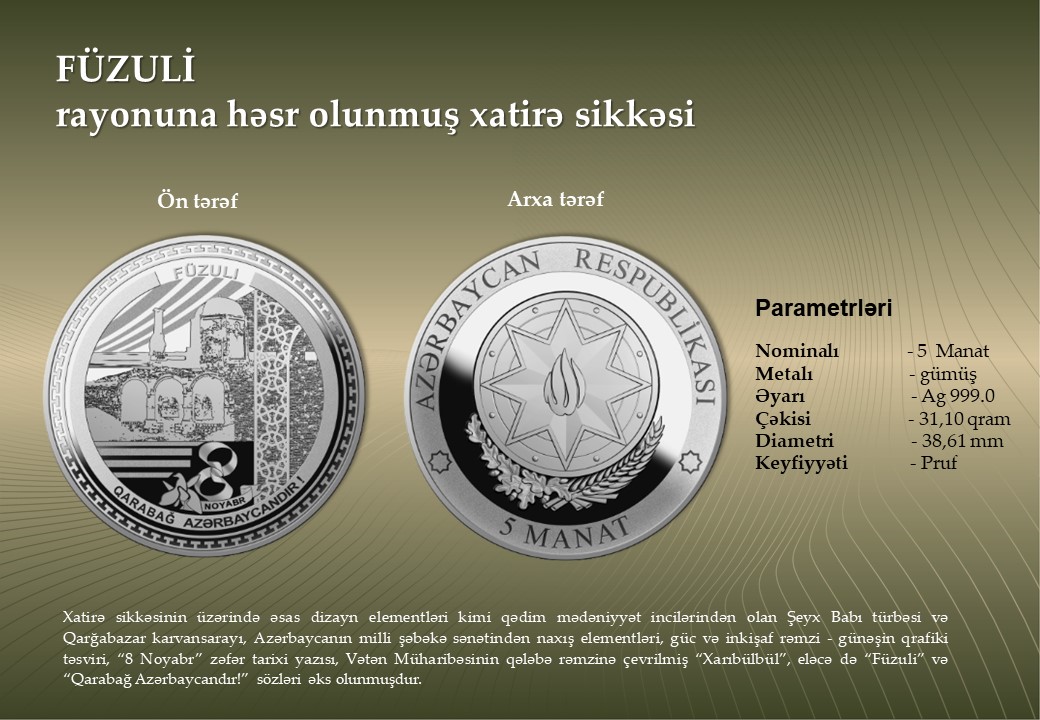 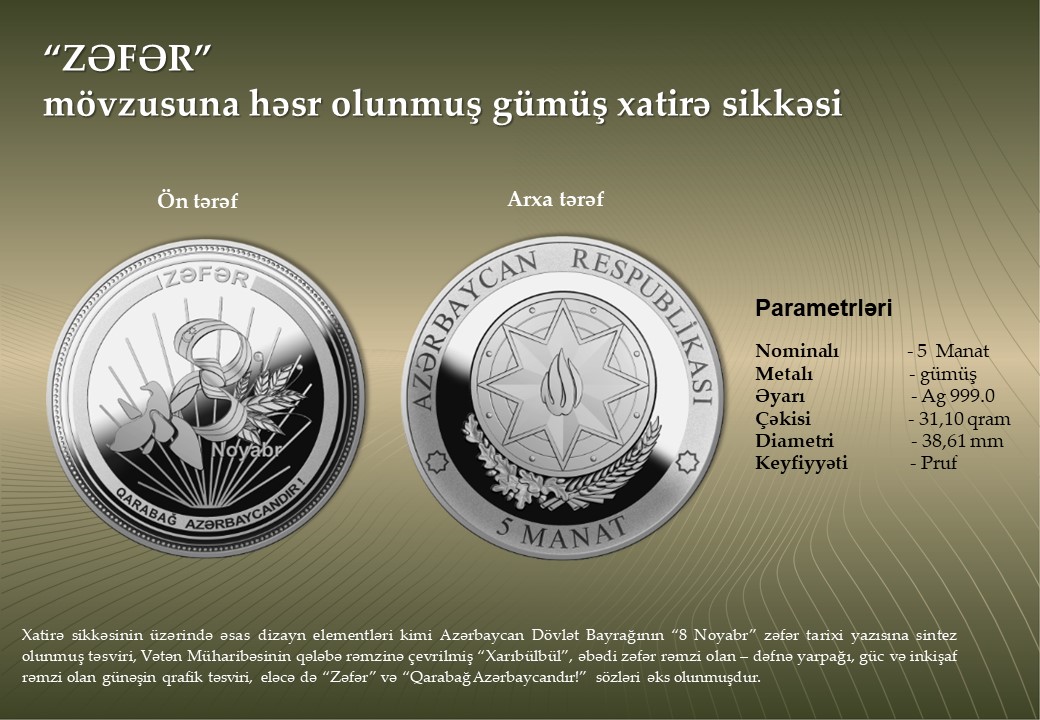 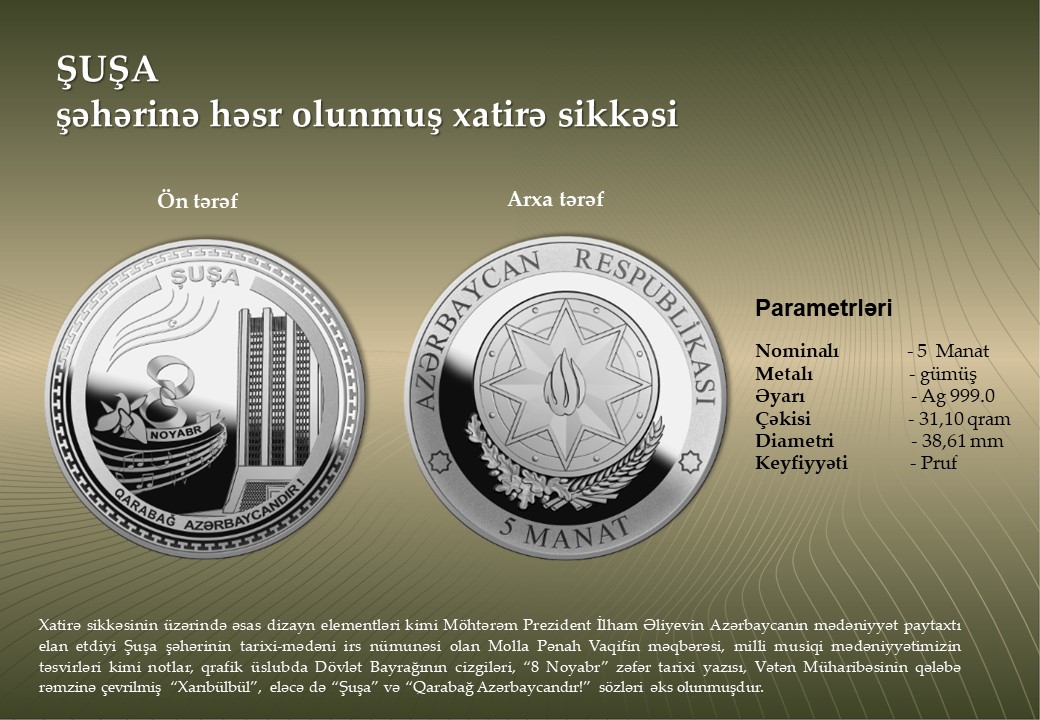 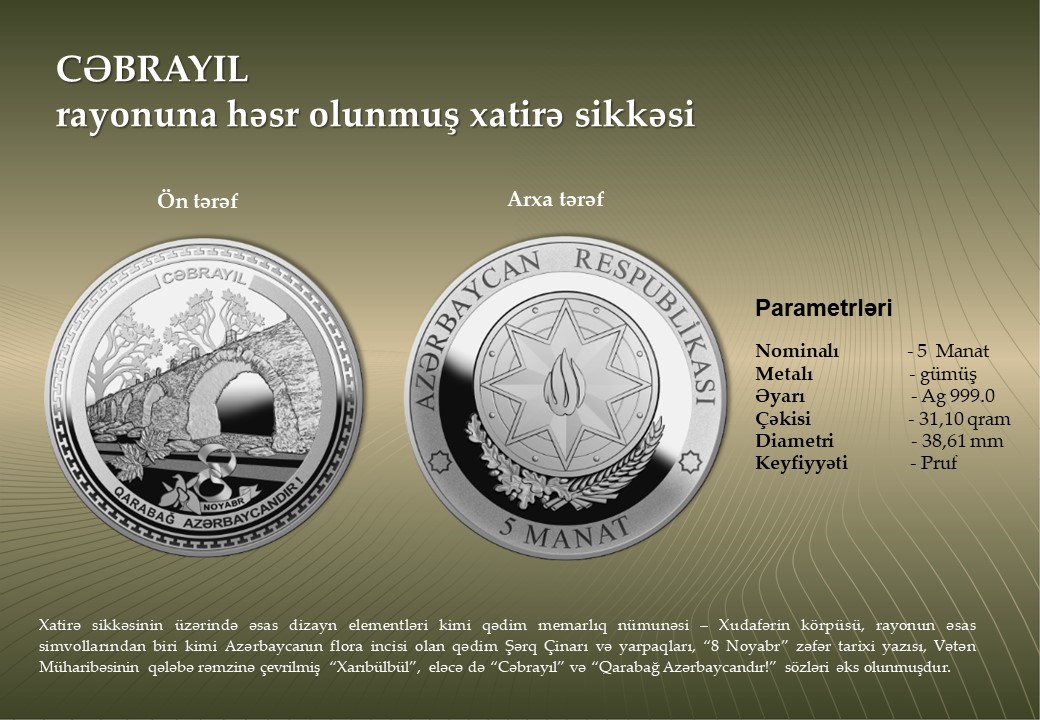 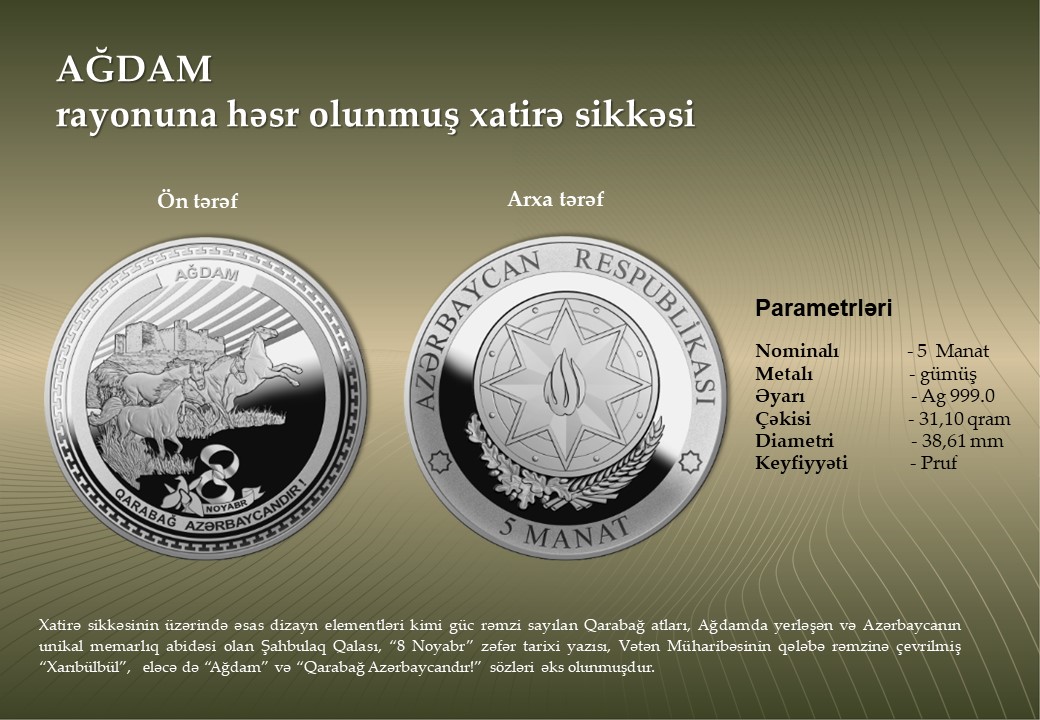 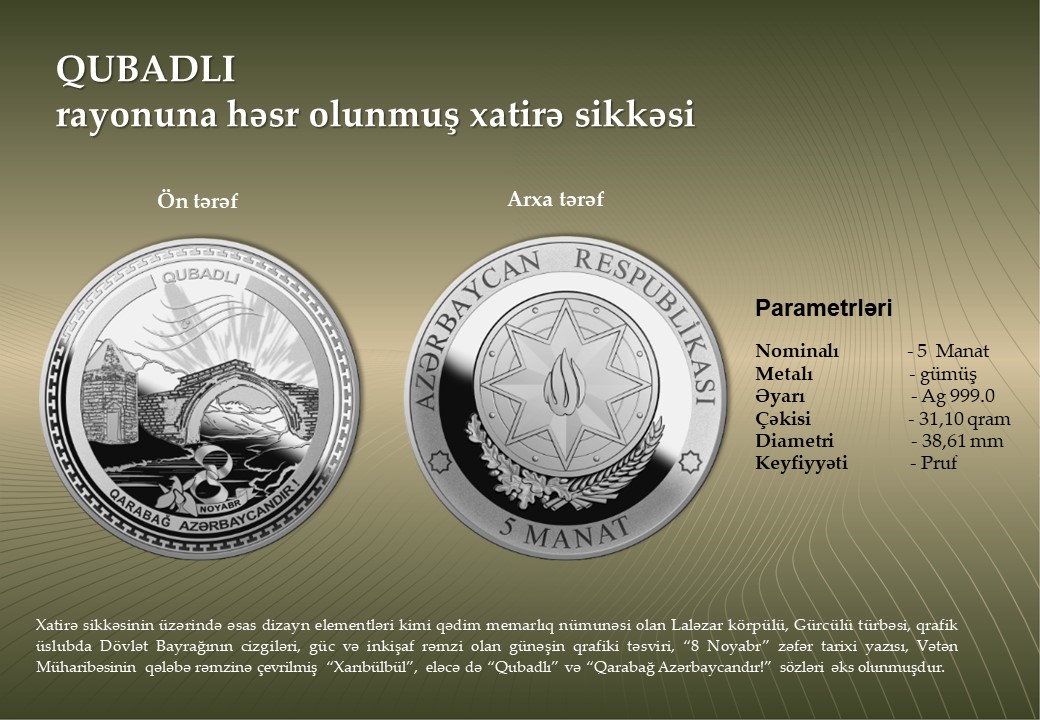 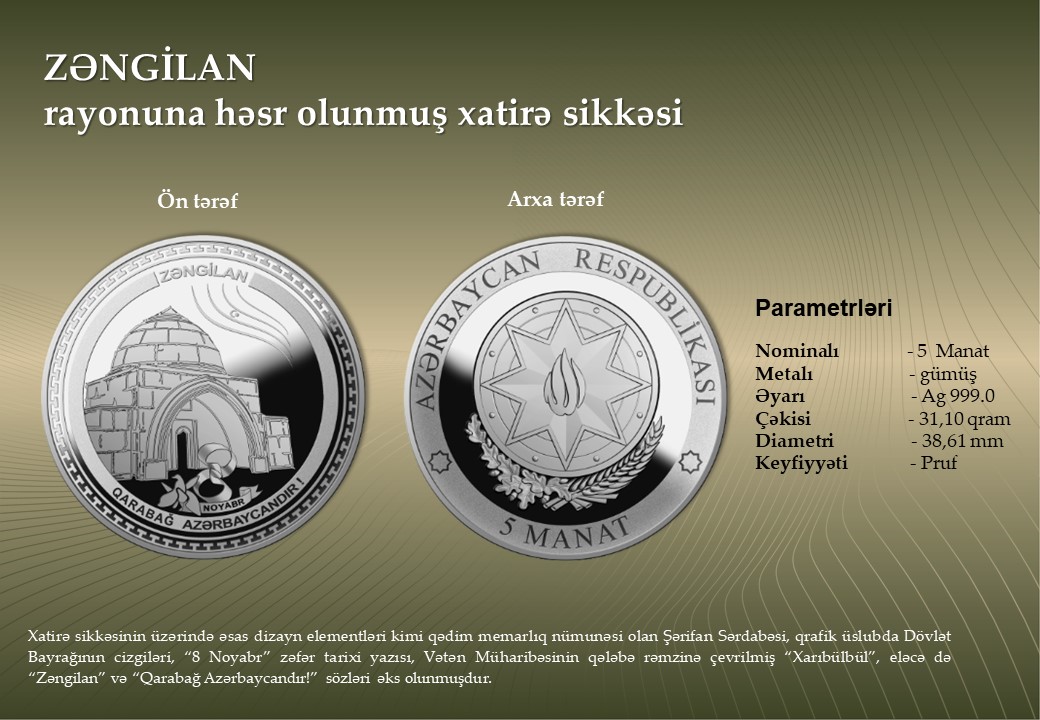 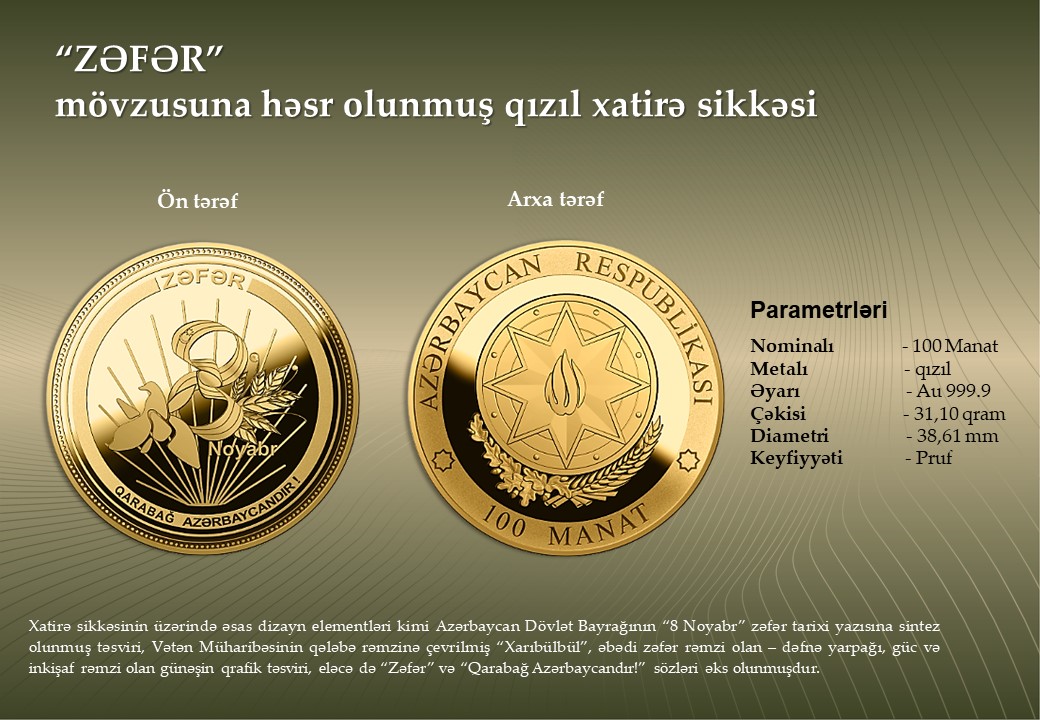 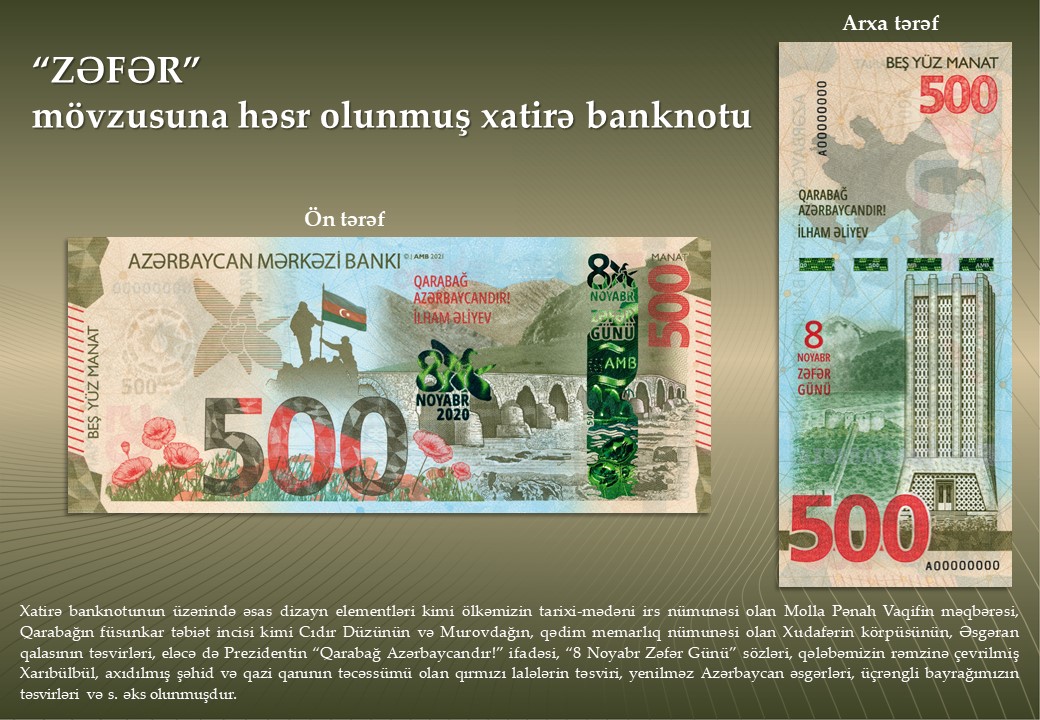 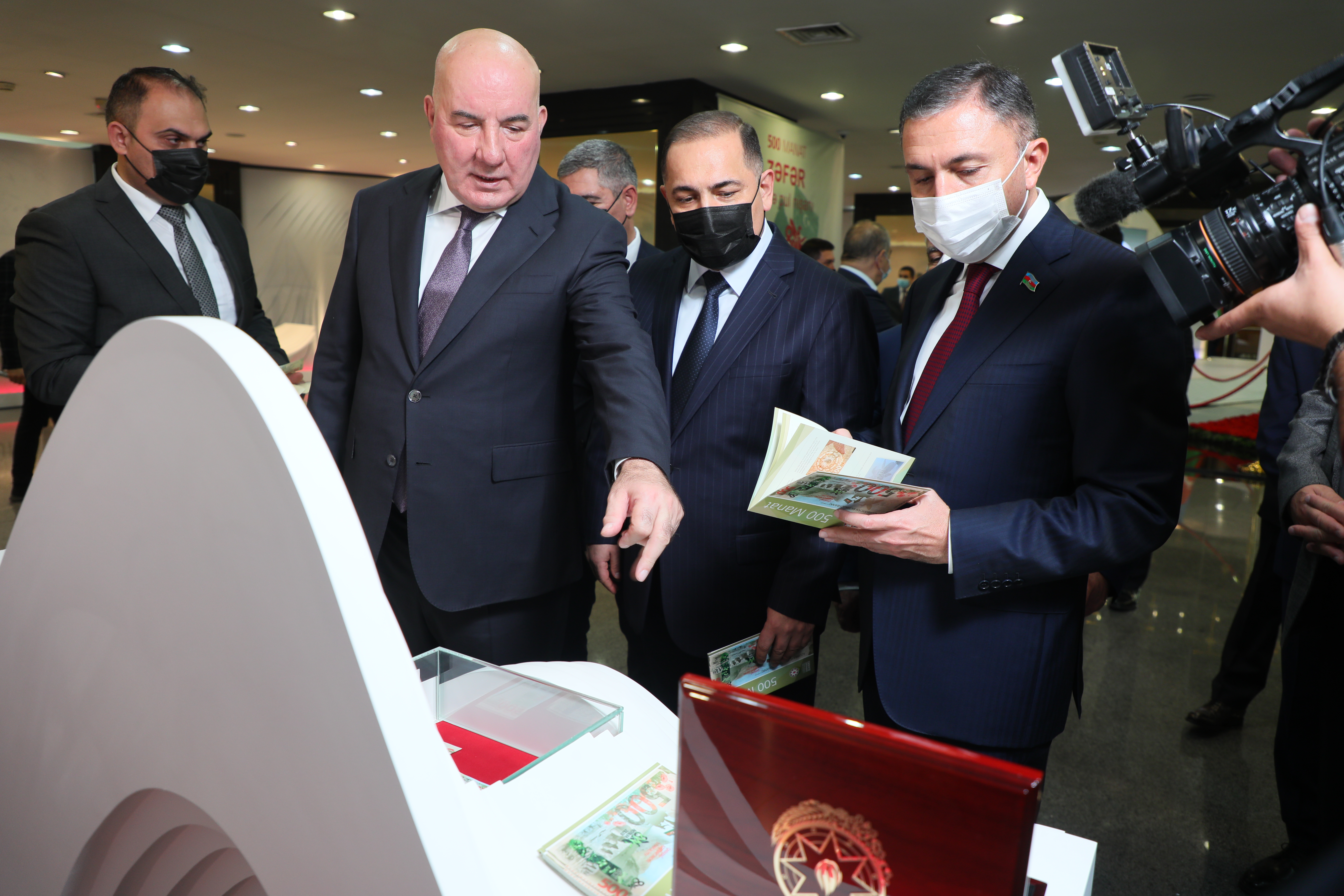 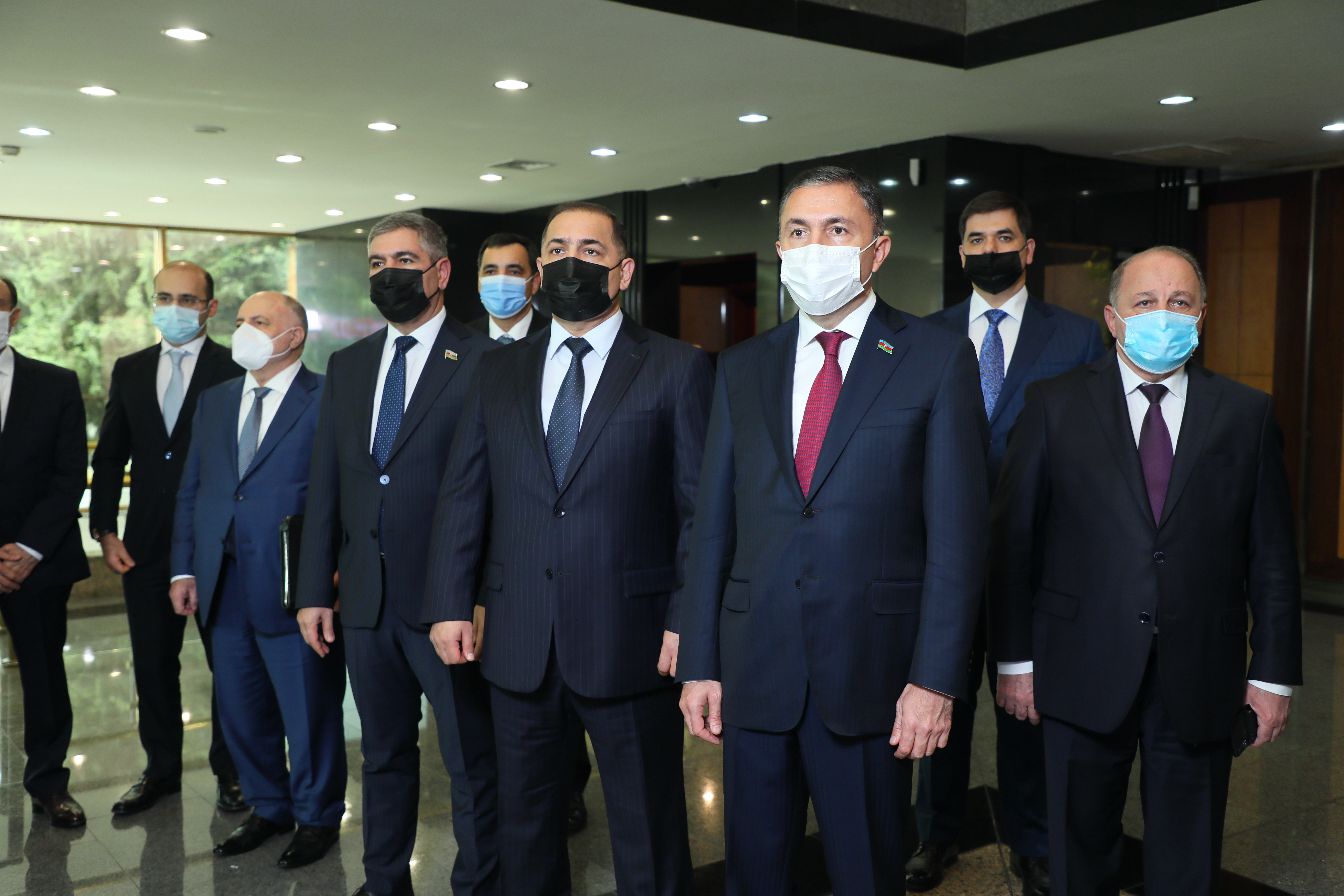 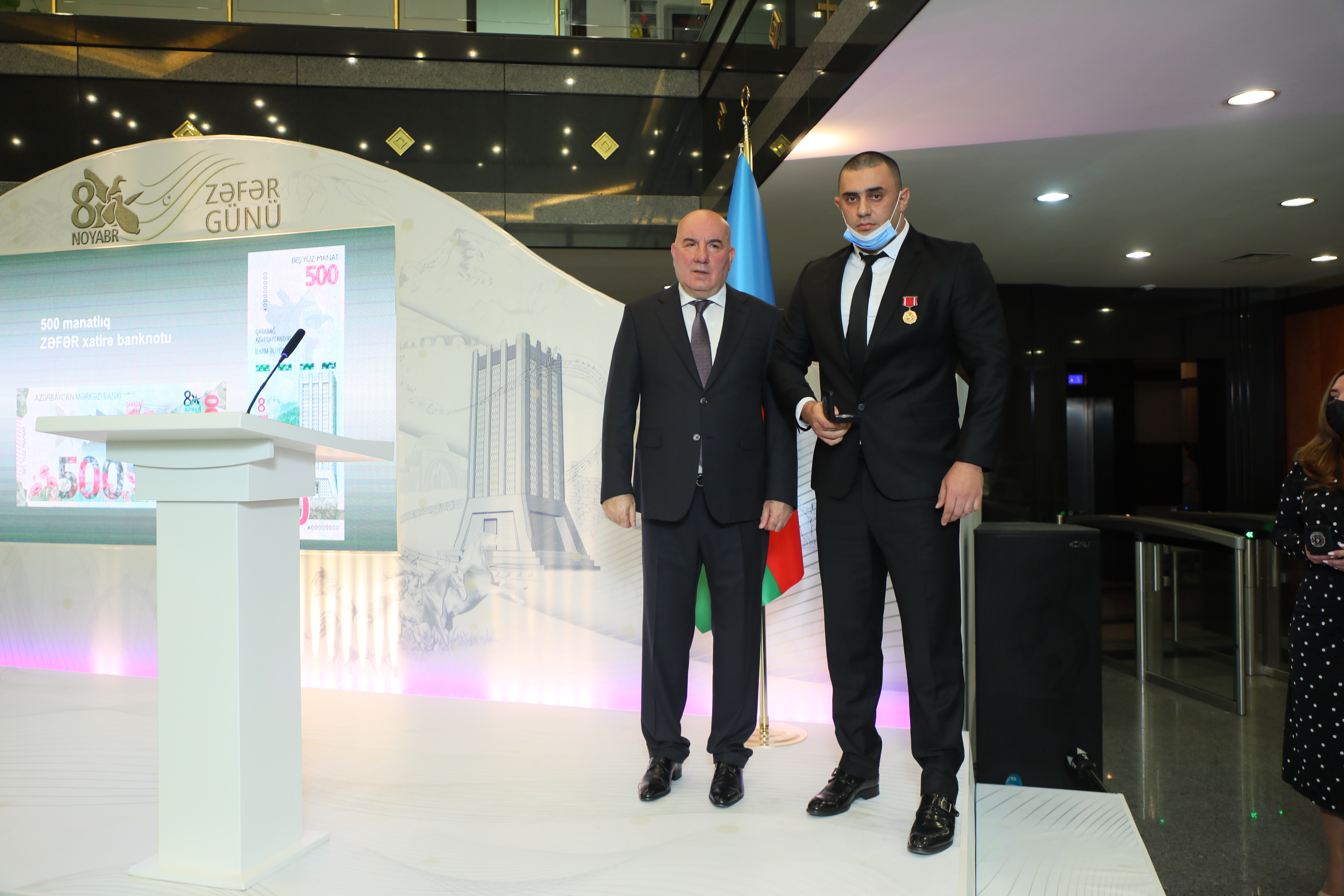 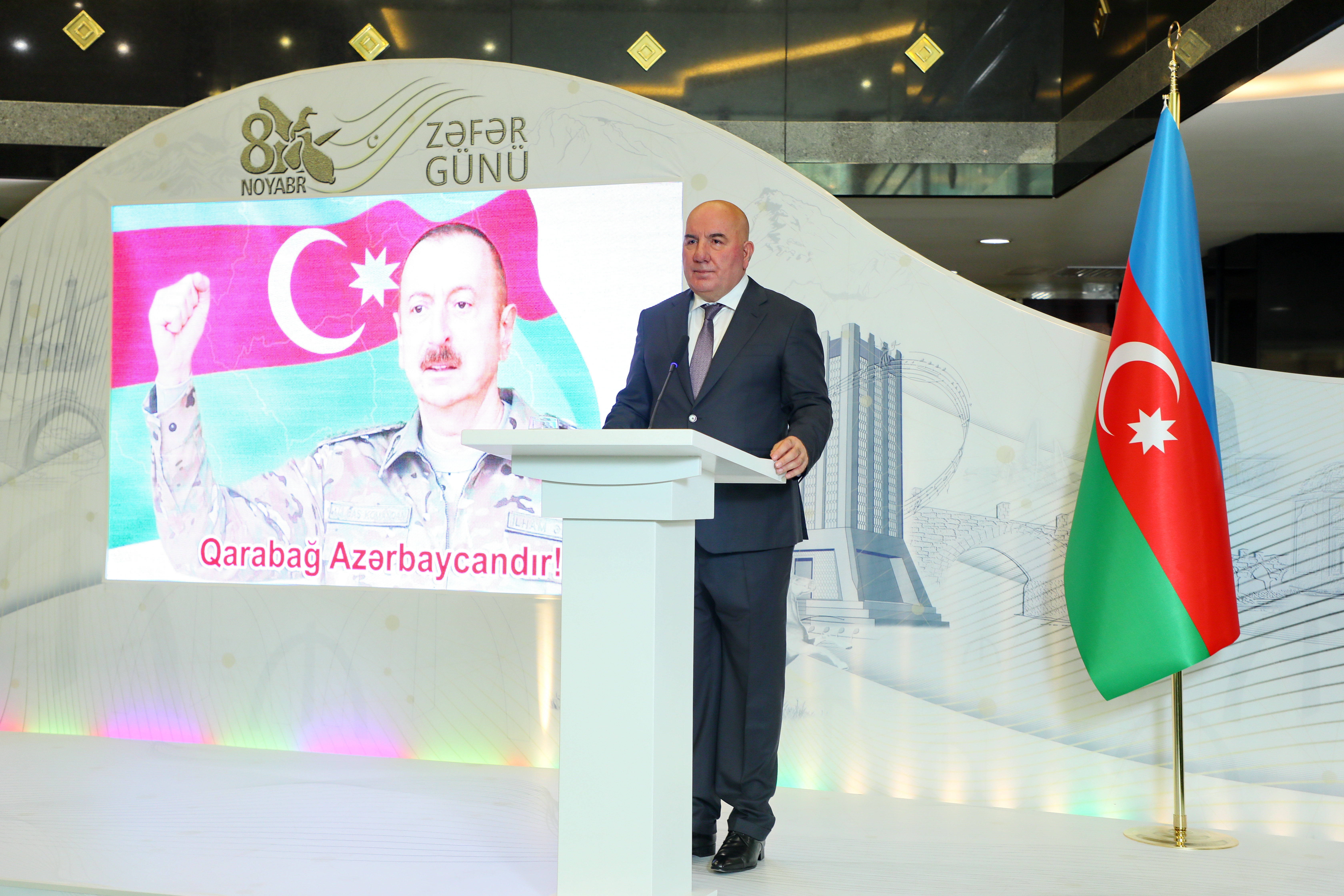